If you’ve read the first two parts of this guide, you’ll now know what a compressor does and when you might use one. For part 3, we’re looking at different types of compressor to help you choose the right tool for the job.

Most compressors are single band (as opposed to multi band – see below). This means that they react to the dynamic content of the entire frequency spectrum equally.

For example, if you’re compressing a drum bus and you’ve got a huge bass drum with lots of sub on it, the compressor will kick in against that, reducing the level of everything else along with it (which can cause pumping.)

That’s why it’s often a good idea to do any corrective EQ you need before you hit the compressor, to make sure wayward rumbles don’t destroy the dynamics of what you’re compressing.

As well as being single band, most compressors will be RMS sensitive. Simply put, the RMS level is the average level of the material. So, rather than reacting against every single peak, an RMS compressor will smooth out the overall level.

To see the difference between RMS and peak, try download PSP Vintagemeter, load two versions, set one to VU and one to PPM. The former is showing the RMS values and the latter, peaks.

Peak compressors on the other hand, as you would expect, react to peaks. These are useful for ‘spiky’ or overly percussive material, and are often put in chain after using an RMS compressor, particularly on vocals. This way you can smooth out the overall level and use a peak compressor to tame anything still sticking out.

If using a peak compressor you would of course generally use shorter attack and release times than with an RMS sensitive compressor.

Peak compressors are less common, but many stock DAW plugins give you some control over how sensitive it is to RMS or peaks.

Although many people think of limiters as being distinct from compressors, they are in fact simply fast acting, high ratio peak compressors.

Old style limiters still allow some peaks to go through, but the introduction of the brickwall limiter (starting with the famous Waves L2) allow us to keep squeezing until it hurts (literally in some cases).

Multiband compressors can be any and all of the above; but they split the signal into separate frequency bands, allowing you to compress the bass, mids and treble separately (or more, or less, depending on the number of bands).

Multibands are again most often used in mastering where they’re useful for:

Multiband compressors aren’t always the appropriate tool for the job, in fact, they’re usually not, but when they are they can be a real life saver. Be careful though – it’s very easy to destroy a sound with overuse of multiband, only use it if you really need to.

Beyond the types covered here, there are of course many different subsets and circuit types: feed-forward, feed-back, VCA, opto…the list is practically endless.

All of these behave differently and give a slightly different sound, but the best advice for these is just to try them and see. As long as you know you’re using a single band RMS compressor (for example) it will do the job you want it to, whether it’s opto or feed-forward etc. just means it will do it in a different way.

The maxim ‘you get what you pay for’ holds true for most pro audio products, but I’ve recently been pleasantly surprised at the quality of some free VST plugins. Most useful are the free utility plugins used as loss-leaders, but there are also some really talented bedroom programmers out there.

I’ve tried out quite a few over the last few months, and these are my favourites.

Some people find needle meters somehow easier to understand than the bar meters most DAWs use these days (myself included). If that’s you, PSP Vintagemeter could be the answer for you. Useable in either PPM or VU mode, it’s a nifty way of getting needles into a digital environment. 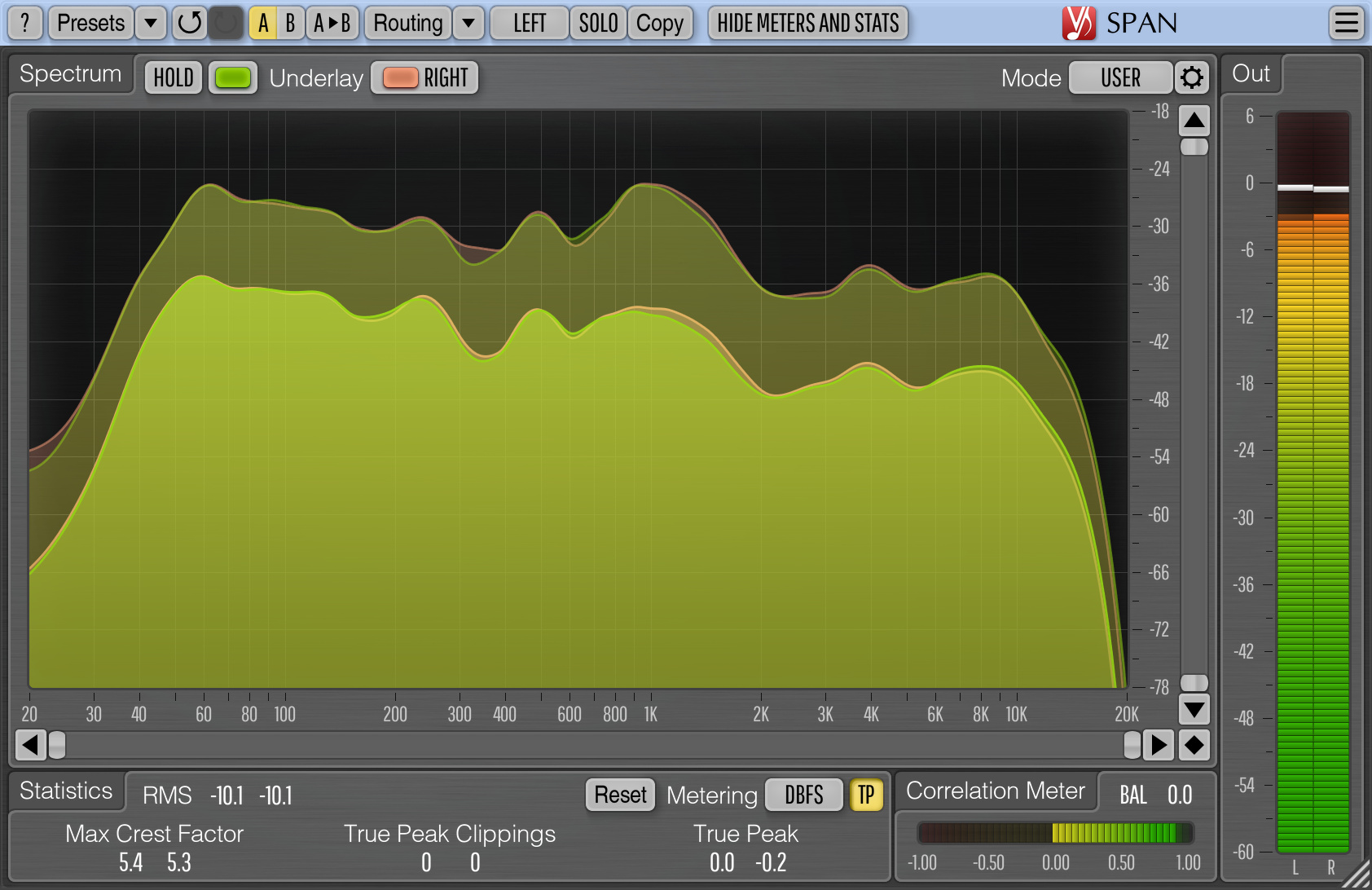 BlueCat FreqAnalyst is a fully customisable spectrum analyser that even lets you zoom in on a particular frequency range for more detailed inspection.

Voxengo’s SPAN is a great all-in-one analysis tool that gives you metering of almost any kind you could want – from standard VU and PPM to different K weighted scales, average values (RMS and crest factors) as well as a very useable spectrum analyser. The only problem is it does seem to colour the sound a little bit when switched on…

BlueCat’s Gain Suite contains a number of very simple plugins that literally do what you’d expect – adjust gain. This is actually more useful than you might first think, particularly for optimising gain structures when running outboard gear as external plugins from your DAW.

Anyone interested in mid/side processing would do well to download Voxengo’s MSED. Although it’s not too difficult to manually set up a mid/side chain if you know how, this is a great time saver.

The Audiocation Phase AP1 is great for sorting out phase relationships in your mix.

Voxengo’s Tube Amp is great for adding crunch to a signal, particularly when run hot and in parallel. It’s actually surprisingly tube like as well.

The excellent Bootsy over at Variety of Sound has put together three brilliant saturation plugins: the Ferric TDS tape simulator and the Tessla SE and Tessla PRO transformer saturators. The Tessla PRO is particularly interesting as its transient aware.

What free VST plugins can you recommend? Leave your answers in the comments.